A frequent question when dealing with browser forensics is ‘Does the Hit Count value mean that the user visited site ‘x’, on ‘y’ occasions?’ Most browsers record a ‘Hit Count’ value in one or more of the files they use to track browser activity, and it is important that an analyst understands any potential pitfalls associated with the accuracy, or otherwise, of this value.

We recently received a support request from an analyst who was analysing Internet Explorer data. They had found a record relating to a Bing Images search, which showed a hit count of 911. The particular search string was significant, and very damning had it actually been used 911 times. The analyst wanted to know if the hit count value could be relied upon.

The following experiment was carried out in order to establish how this surprisingly high hit count value could have been generated. In order to obtain a data set which contained as little extraneous data as possible, a brand new VMWare virtual machine was created. The machine was setup from the Microsoft Windows XP SP3 installation disc, which installed Internet Explorer v 6.0.2900.5512.xpsp.080413-2111 by default. Two user accounts were created on the machine – one to be used as an Admin account, for installing software etc; and the other to be used as the ‘browsing’ account. This separation of the accounts further assisted with minimising the possibility of any unwanted data being present within the ‘browsing’ account. Using the Admin account, the version of Internet Explorer in use on the virtual machine was upgraded to IE v 8.0.6001.18702. The ‘browsing’ account was then used for the first time. Starting Internet Explorer immediately directed the user to the MSN homepage. The address ‘www.bing.com’ was typed into the address bar, which led to the Bing search engine homepage. The ‘Images’ tab was clicked. This Auto Suggested a search criterion of ‘Beautiful Britain’, as can be seen in the figure below: 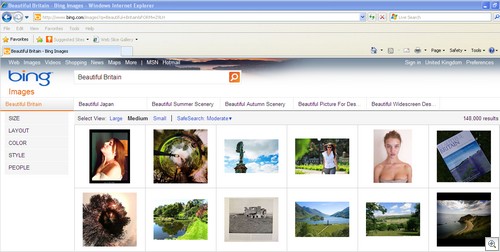 The term ‘aston martin’ was then typed into the search box, as shown below: 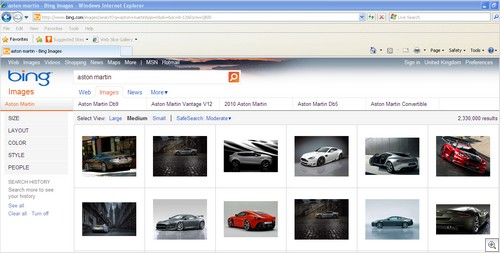 None of the images were clicked or zoomed, nor was the result screen scrolled. Internet Explorer was closed, and the browsing account logged off. The Admin account was used to extract the browser data for processing in NetAnalysis. The below image shows some of the results. Both of these entries are from Master History INDEX.DAT files:

The virtual machine was started again, and the browsing account logged on. The previous steps were repeated; typing ‘www.bing.com’ into the URL bar; visiting the Bing homepage; and clicking on the ‘Images’ tab. Once again, Bing Auto Suggested the search criterion of ‘Beautiful Britain’, and displayed the same thumbnail results page. The search criterion ‘aston martin’ was again typed into the search box and the same thumbnail results page was produced. None of the images were clicked or zoomed. The results page was scrolled using the side scroll bar, which generated more thumbnails as it went. Internet Explorer was closed, and the browsing account logged off. The Admin account was used to extract the browser data for processing in NetAnalysis. The below image shows some of the results. Both of these entries are again from Master History INDEX.DAT files:

As can be seen, the ‘Beautiful Britain’ search now has a hit count of 13 – it is not at all clear how Internet Explorer determined this figure. Moreover, the ‘aston martin’ search now shows a hit count of 511. This page was not visited 511 times, nor were 511 of the thumbnail images clicked. The contents of the INDEX.DAT for the local cache folders (Content.IE5) were checked to see how many records were held relating to thumbnails that had been cached. The results were as follows:

So it does not even appear that there are 511 thumbnails held in the local cache. The result page was scrolled quickly, so the user did not see a large proportion of the thumbnail images.

In conclusion, it is apparent that the ‘Hit Count’ maintained by Internet Explorer cannot be relied upon. Although this experiment involved a quite specific process relating solely to image searches carried out on one particular search engine, the disparity between results and reality makes it clear that unquestioning acceptance of what Internet Explorer is recording as a ‘Hit Count’ could lead to significant errors if presented in evidence.

To complete the experiment, two further identical Virtual Machines were created. On one, the Google Chrome browser (v 15.0.874.106 m) was installed and used. On the other, the Mozilla Firefox browser (v 8.0) was installed and used. The same steps were repeated: typing ‘www.bing.com’ into the URL bar; visiting the Bing homepage; and clicking on the ‘Images’ tab. The results from these processes are shown below:

It is apparent that both of these browsers seem to maintain a more accurate ‘Hit Count’.